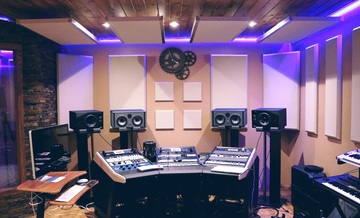 There are two core reasons why you should get the best laptop for music production. One is to get the requisite high-end processing power to ensure smooth usage. The second is that a laptop for home recording studio purchase will be a long-term one.

Therefore, you need a laptop that is durable, and more importantly, would be able to offer terrific value over a long time (in years).

It practically has no rival, and frankly is in a class of its own. Everything from the build to the internals to the user experience is top-notch. It is lightweight and features a QuadCore i7 processor clocking 2.0GHz in processor speed.

Furthermore, it features a Turbo Boost that takes the processor speed to a whopping 3.1 GHz. Combined with a 16GB RAM, and flash storage, it can handle multiple processing without hassle.

If you would be using your laptop on the go, then it would interest you to know that it sports a long battery life at up to 10 hours, which is double the industry average.

The Turbo Boost maximum clock is 2.7 GHz. What it lacks in processor speed, it makes up for with its standard 15.6-inch screen.

It definitely offers more screen estate than you would get from the MacBook Pro 15.4”, which should not matter much as far as recording is concerned.

However, it is a nice feature to have. As indicated in its model name, the screen is touchscreen and supports multi-touch.

From here on, the Dell Inspiron sounds like a good deal as it also features an 8GB RAM and an impressive 1TB Hard Drive that would meet your storage needs. It also features the standard bells and whistles including a 1 Gigabit LAN Ethernet, 802.11ac Wi-Fi, and Bluetooth 4.0 for all-round connectivity.

Even better, all of this comes in a package that costs roughly half of what the MacBook Pro 15.4 goes for.

It shares the same Intel Core i5-4210U processor clocking at 1.70 GHz as the Inspiron. It also has the Turbo Boost technology that can enhance the processor speed to 2.7 GHz.

It also features the regular connectivity options including, HDMI, Wi-Fi, Ethernet, USB 3.0, Bluetooth amongst others. Conclusively, it offers a well-rounded package that is terrific for your home recording setup at a price point that is lower than the MacBook Pro and Inspiron.

Factors to Consider When Purchasing the Best Laptop For Music Production

Buying a laptop for any purpose really can be a difficult endeavor. Plenty of models from a diverse array of manufacturers populate the store shelves with features that are all over the place. More perplexing is the fact that virtually all models have different variants as well.

However, when purchasing a laptop for your music production, you have to pay mind to certain features more than others. These include:

This is the engine of the computer. Go wrong with this, and your recording sessions will be a nightmare. There are two major processor manufacturers—Intel and AMD. Between the two, Intel is the clear winner, and their processors cost more as a result.

Intel sports processors in different lines and models, but the line you have to pay attention to is the “Core i” line. There are three series in this line from weakest to strongest—Core i3, Core i5, and Core i7.

The best laptop for music production will feature at least an Intel Core i5 processor.

Comparing generations and models may sound like a strenuous activity: However, it is important. Perhaps the most valuable reason why it is important relates to processor speed.

The unit of measurement of processor speed is Gigahertz (GHz). In simple terms, the faster the speed of a processor, the more it can accomplish in a certain amount of time. Therefore, a 3.0 GHz processor will perform better than a 2.0 GHz.

In summary, the most important metric to consider is the series of the processor—preferably go for Core i5 or higher. Then when you compare computer models, dig deeper to check the generations and processor speed (in GHz).

RAM is the acronym for Random Access Memory. The units of measurement are MB or GB (megabyte or gigabyte). The general rule of thumb is that higher is better.

The best laptop for music production should at the very least have a RAM of 4GB.

Your files and folders exist on your hard drive. Because it is also a memory, its units of measurement are MB or GB or TB (megabyte, gigabyte, or terabyte). The general rule of thumb is like that of RAM—higher is better.

Another important metric to check is the type of Hard Drive. The common type is traditional hard disk drives (HDD). Lately, a new type has been making the rounds and giving HDDs a run for their money; this type goes by the term Solid State Drive (SSD). They are faster but more expensive than HDDs.

Having an SSD or an SSHD (Solid State Hybrid Drive—a combination of SSD and HDD technology, and is relatively cheaper than a pure SSD) would offer faster boot times; quicker app loading; and faster, quieter recording operations.

Certainly, the three factors discussed above are not all you consider, but they are the most important. Other factors you can consider include the interface type and price.

Talking about price, there is not much to look out for. You are not buying a gaming laptop or a laptop for running highly demanding programs like video editing and architecture programs, so you wouldn’t wouldn’t need 32GB RAM, 320GB SSD or a latest-gen Core i7 to boot. Consequently, the best laptop for music production often occupies affordable price points.

Moreover, many models are configurable, so you can afford to add an extra feature for relatively little, say bump the RAM size without offering an arm and a leg.

The list contains models that would do well at different budgets. However, if you do want the best home recording computer, then you should get the MacBook Pro. Its processor and flash storage feature are its biggest draws that enable it to outperform its competitors. However, if you are on a lower budget, then the Dell Inspiron and HP Pavilion 17 would do.

Recordingexpert.net is a participant in the Amazon Services LLC Associates Program, an affiliate advertising program designed to provide a means for sites to earn advertising fees by advertising and linking to Amazon.com.